In the semi-finals the Maltese junior was paired with tournament second seed Brendon MacDonald. Sultana started very strong, taking the first two games 11-5, 11-5. MacDonald fought back hard to win the third game 11-9. Sultana did well to squeeze out the Australian in a 13-11 fourth game victory.

The Maltese junior champion was again in top form in the final against tournament top seed Joshua Penfold. Sultana outskilled his opponent to win the match and the tournament in three straight games 11-5, 11-9. 11-3.

This is the first Under 19 championship win for Kijan since he turned seventeen earlier this year and follows his tremendous achievements last year when he secured both Queensland State and Australian National titles in the Under 17s.

Sultana is currently based in Brisbane, Australia where he has been training under the watchful eye of professional coach Bradley Hindle.

Kijan Sultana is supported by SportMalta, the Maltese Olympic Committee and through the Malta Sport Scholarships Scheme financed by the Government of Malta 120 Views
Twitter
Facebook
Pinterest
Linkedin
The government hands over store number 3 in Senglea to Senglea Regatta ClubJune 22, 2021
An investment of around € 20,000 in a fitness gym for the community in Ta ’KandjaJuly 5, 2021 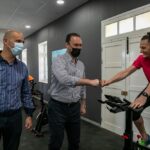 On the 29th of June Hospice Malta along with SportMalta worked on creating Festa Sport, a collaboration with various Sport...

On behalf of Chairman Luciano Busuttil , Board of Directors , CEO Mark Cutajar and all employees at SportMalta, we...