On the 24th of September the Malta Employees Sports Association organized a Beach Volley tournament at Pretty Bay in Birzebbugia for all employed individuals interested in sport and the sport of Beach Volley. 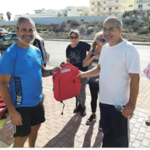 On Boxing Day, the L-Istrina yearly event took place at the Kirkop Sport Complex. It’s an annual event where everyone...

Agones SFC is part of the Youth Tri for Wellbeing and Healthy Lifestyle youth exchange organised by Tri Team Sofia. From the...