On the 9th of October St. Paul’s Bay organised a yoga session for all ages and abilities as a part of being active all throughout during the European Week of Sport. The local council gathered over 15 participants on the day which contributed and attended the class.

The participants arrived at the Millennium Garden at 8:30am to take part in this activity, during the Yoga, the yoga instructor showed the participants basic yoga movements as the activity was set out to reach all abilities. At the end of the yoga activity at the Millennium Garden the group left for a walk towards the National Aquarium, including not just a yoga session but also an interactive social walk. Upon their arrival at the National Aquarium, thanks to SportMalta, participants were given SportMalta bags.

This was a successful event and the Local Council of St. Paul’s Bay decided to repeat this activity as it turned out to be fruitful and successful. Residents had time to be active and socialise while doing some yoga and walking together. A special thanks to SportMalta for their help and inclusion throughout the activity. 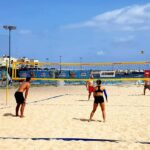 As a part of the European Week of Sport St. Patricks Athletic Club held a 5k race and walk at Smart City for another...

The building of the Kirkop FC football club has now been transferred to the same club by the Government through an agreement...